F is for Flawed Fun Fighting.

I might be a freak, but I really enjoy writing fighting scenes. Maybe it was because I was a fencer in college (saber and foil). Maybe its cause I did some work with the theater in fight scene chorography…here is a HORRIBLE skit thing I played a part in…freshman year. Where I choreographed the fight scene for…if you choose to watch it (at your own risk) please skip to 5:10 in…which is where the fighting begins, and ignore my horrible acting, the actor I taught fighting too didn’t show.


As for writing fight scenes, there is something about how quickly the scenes move that make them fun. At least to me. Here is a short excerpt, once again that was cut, from my current WIP, Sacrifice. 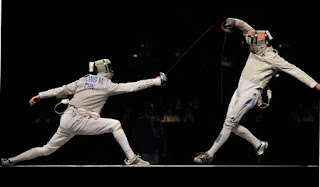 A bit of background: Leni is a trained assassin. Although as a sacrifice, she has no rights, so her best friend was hired to kill a man, she botched the job, and Leni is attempting to clean up the mess.

“To bad” He replied throwing a knife, but Leni ducked letting it slip harmlessly above her head. His two friends took the opportunity to move sideways so they were surrounding her. The others didn’t know how to fight together, Leni knew she wasn’t as lucky with these last three.

She took a quick step back, bumping into a table. Her hands felt something smooth and cold. Instinct took hold, as she grabbed the object. She jumped up as the one to her right attacked. Leni somersaulted backwards on the table. She stood up next to the one on the left, and smashed the bottle over his head. She broke his neck as he dropped to the ground. The next one attacked, weapon at the ready. Leni easily avoided his swing and stabbed him in the chest with the broken bottle, wrenching her wrist so that shards stuck in the wound, delivering a kick, pushing them deeper.

All that she had left was the neck of the broken bottle and. The table separated them, and Leni used the brief moment to pick up another sword from the floor, the pommel was slick with blood, and Clive was around the table charging. She blocked his blow, forcing him off balance, he fell forward, and Leni turned the neck of the bottle in her hand so it impaled his eye as he fell. A mist of blood coated her arm, before she pulled away, leaving the bottle neck where it was, and walking towards the door.

“Get them outside,” Leni heard herself yell again, to Amiel, who was running down the stairs.

She turned to see the mercenaries discarding their drinks and picking up weapons. “I really don’t want to hurt any of you.” Leni said slowly, she knew her voice was affected by the poision the temple gave her that kept her numb and impaired,  but she was hoping that her anger hid it.

The closest one laughed, Leni thought his name was Clive. She could still feel his hand on her
leg, telling her things would be okay, slipping a bottle towards her. “Hurt us Leni?” He asked, stepping forward “Can you count? You’re outnumbered, and what exactly do you plan to do? You’re unarmed.”