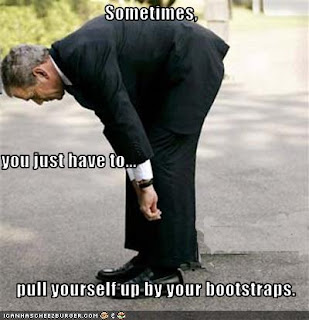 I've never understood the phrase "Pull yourself up by your bootstraps" cause presumably your bootstraps should be on your feet, and really, even if your laying down, it would do you little to no good to try to stand up by pulling on your feet. Maybe if you took your boots off and used them like grappling hooks it might make sense, although that would involve several more steps than pulling.

It's always kind of unnerved me that the saying implies you can get out a bad situation by hard work through comparing it to an impossible task. It's almost as obnoxious as water cups the size of shot glasses. But really, what's that saying. Hard work is a lot but it might not ever get you anywhere without help? Maybe that's why Henry Hoovers policies were so unpopular after the beginning of the great depression.

Wish I could say I was getting anywhere by pulling on my own bootstraps, although I get the distinct feeling I'm pulling myself around in circles. Lately I've had some sever difficulty focusing, and I'm beginning to think I need a proper technology break.  Like me, my backpack, woods and my cell phone turned off and stashed somewhere. Either that or go back to my doctor an get a prescription for Aderol. Although that's not necessarily true.  I was able to finish an entire (short) book this weekend.

It might be more accurate to say that I'm getting frustrated with my job search. You see, thus far the only people who have asked me in for an interview have been pyramid schemes and door to door sales jobs. No offence to anyone that goes door to door, it's just well, I'd rather move home and live in my parents basemet before I take a job like that. The issue with job searching is that there is often little or no return on effort. I call and email and apply, and hear nothing. Which leaves me feeling like I'm spinning in circles and getting no where (which you don't when you spin in circles).

I have to some degree kept myself busy though. I am now going to be guest contributing to Never to Fond of Books. Hopefully my first post will be up this weekend, and it's about the evolution (or lack thereof) of Epic Fantasy...aka why I don't like Game of Thrones (poorly written and predictable).

Here's to hoping that pulling on my bootstraps don't end up with my foot in my mouth. And that I find a job soon before I go insane, or run out of money.
Posted by Sara at 5:46 PM