D is for Insecurities. 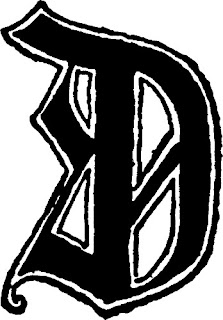 Or D could be for Damien, who is one of my main characters in my current WIP. Damien is described as:

He was tall, taller even than Mother Trina, with dark hair, that looked like he cut it himself, so it stuck out in a haphazard way. Leni couldn’t make out the color of his eyes, they were somewhere between brown and green, with skin tanned from lots of time outside. He had an open face, which Leni guessed would make him attractive enough if he smiled, but he was keeping his face intentionally blank. To be fair, though, so was she.

The most impressive thing about him, Leni thought, was not his size, it was instead the great sword, which he carefully drew and wrapped in padding.

He is probably the character I’ve poured the most of myself into. He is self deprecating, he is light hearted and uses both of those things to disguise a troubled past. But Damien is also full of self doubt and duty. That combination makes him a very insecure character. Especially when he has doubt about the duties he is supposed to perform.

Because of all that he is a lot of fun to write. As time goes on, he wants more and more to try to help the MC, yet he is duty bound not to. One of my favorite Damien scenes that has actually been cut is a bit of dialogue between Leni and Damien:

“Dai,” she whispered, “What am I doing here?”
“You called me Dai” he replied,
“Not the point.”
“What if I don’t want you to call me Dai?” he whispered, lips brushing against her neck.
“Do you care if I call you Dai?” she asked, shuddering under his touch.
“You don’t let me call you Lens” he replied, smelling her hair
“Fine call me Lens, but answer the question.”
“I don’t care if you call me Dai or not.”
“Not the question I wanted answered” Leni snapped.
“I know. I forgot your original question” he answered, lifting his head.
Leni paused and stared at him. “Would you stop me if I tried to leave?”
“Depends,” he answered smiling, “where would you go?”
“Away from you.”
“Could I follow you?” he asked, frowning slightly.
“Why would you want to?” She asked
“Why don’t you want me to?” He whispered, tracing a scar along her back.
“Stop answering my questions with questions.”
“Sorry. What was your question again?”
“Would you stop me if I tried to leave?” She asked again.
“Do you want to leave?”
“Damn it Damien.” She shouted, pushing him away. “Just answer the question.”
“I think I already have.” He replied letting his arms fall to his sides.

Who is your most insecure character? Why?
Posted by Sara at 1:16 PM