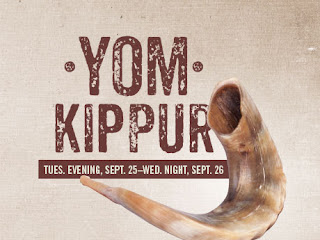 I had another post that was scheduled to go up today. I was all ready to post it and everything. Actually, for the first time in a long time I have two solid ideas for posts. One about making boy's cry, and the other a quasi rant about dating and society. But today, I decided not to post either of them. See, today is the Jewish day of atonement. You might be wondering why in Judaism there is only one day of atonement. But you have to understand, in Judaism there is no heaven, there is no hell, and there is no absolution. The God of the Old Testament is not the one who sent his son back to forgive mankind for their sins, It's the God that smote cities, and sent plagues, it's the God who sent the flood to wipe out all mankind with exception of the decedents of Noah. Judaism is a hard religion.

Atonement is not about asking for forgiveness and knowing that you will receive it. Atonement is about asking for forgiveness knowing you wont, but hoping that maybe God, this entity that is so above you, so much bigger than you, so much more than you can ever comprehend will take pity on you and forgive you anyway. Yom Kippur is about groveling. It's about fasting, and not fasting thinking that I'm doing a good thing by praying and fasting, that I'm setting a good example, it's about fasting and thinking I'm not doing enough, I could be doing so much more.

It's something I've struggled with for a while. How do you portray that. How do you show someone as being afraid of themselves to the extent that they don't believe they deserve forgiveness, or even life, without making them suicidal. Because Leni is not suicidal. She doesn't believe she deserves to live, but she doesn't want to die either.

I had almost entirely given up on the Sacrifice story. I don't have a firm outline, I don't know how the story will end, although recently I'm remembering why I want to write it. I'm remembering stories about children sentenced to life in prison, which was one of the driving motivators to tell this story, and I'm finding myself motivated again, perhaps its because its getting cold out and Sacrifice has always been a winter story, for when things are hard ...and I'm contemplating a complete rewrite, from the beginning. But in the essence of beginning at the beginning, I'm gonna start this time with an outline.

Maybe the key to writing Sacrifice has always been fasting and cold and religion. It's weird what sometimes inspires you--although this could be like one of those pledges you make under duress and hunger pains that you regret once you take off the rose colored glasses. I guess you'll just have to be like me and wait and see.